Well, from the pages of  history of the  food and culinary dictionary, the rices dishes of biryani and #pulao/ #pilaf have been interchanged to mean the same thing..loosely explained as a mix of rice with meat/veggies with Indian spices. Now ,while in terms of technique its hugely different, yet most often i have seen people using these names to just a mix of rice and spices. So whenever someone mentions pulao, when its  just a separates of rice and chicken, i mentally cringe. I would almost want to correct the terminology and the process of cooking up a pulao or biryani . An avid foodie or a prolific chef can figure out from the first bite if its a plate of pulao, biryani or just a mix rice and chicken stir fried in a  bit of Indian spices.

Stir fry and call it to be a pulao is just travesty of the culinary dictionary of sorts.Misquoted, and misrepresented . For me, its sacrilege to lead someone to believe that just a loosely mix of rice and chicken holds up to its claim of ,or boasting itself of a biryani..

While biryani is the most common of all rice dishes ,its technquie is also popular amongst masses.In short people most often are aware of its cooking technique although a tad complicated to arrive at the perfect texture. Pulao, although simple in technique is actually the tricky one, which actually needs to be told about or exposed in terms of its cooking process and its real identity. Pulao is a little milder and with less spice..But what differentiates pulao is its technique of cooking the rice and meat together in water or stock.Cooking it just enough so that each grain stands out,and not mushy.That is what defines a pulao, not a mix of leftover steamed rice and chicken stir fried in oil and some Indian spices. that’s technically fried rice. But then, fried rice has its origins in the terrain and culture of Chinese cuisines and can posses paternity claims for its invention. So to term such kind of a dish as fried rice has its hazards, that is why perhaps we have never been able to name this kind of a dish in Indian connotation.

For me, my dish is exactly a version of Indian friend rice, so if i may call it, since there is no name for such an invention. For me this is the 4th version of Indian rice mixed with veggies/chicken. Biryani, Pulao, Tehri and now the fried rice,Indian style. And most or  many households should I say, boasts of this kind of rice style and truly, it has its own set of  innumerable loyal fans too.For; simple as it may be, yet its all upto your creativity of transforming a blend of 2 separate dishes into one with the right kind of ingredients bunged together that would define a certain taste.

A reverse way of pulao or a biryani should I say. I am a fan of its taste too, and its easy method just that I wouldn’t term it as a pulao, although my headline says pulao(that’s for the keywords and google clicks,nothing else since pulao/pilaf is one of the most popular searched keywords, ha ha , yes, I need hits for my blog too) 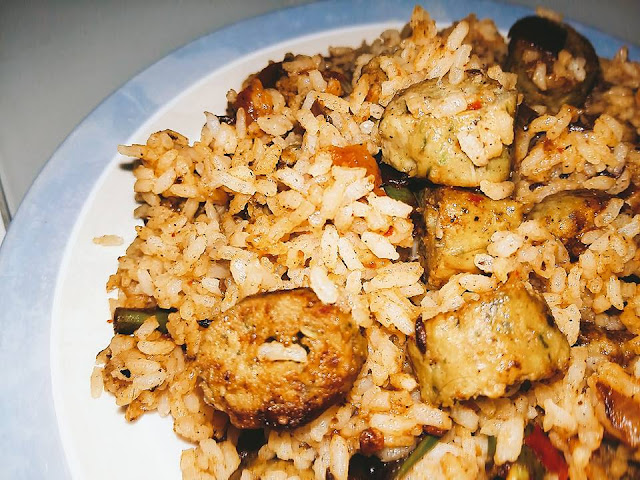 But coming to this variety of recipe, I often make it with leftovers and add different types of ingredients. In fact tawa pulao  is an apt name for the dish named so.It is fried over a tawa and is a blend of pav bhaji masala and rice. You can check the recipe on this blog by clicking the link. This dish, is a mix of sausages and leftover steamed rice which have been worked together and the taste accentuated through a medley of Indian spices, that leads it to gain a a taste similar to a biryani /pulao perhaps minus the strong hold of the whole spices over the dish.Tasty and yummy. Saufiya pulao, another dish that I cook up is on similar grounds which boasts of a fragrant biryani feel too.The recipe is here on my blog too.

Plz note: the veggies and the biryani masala are only options. If you  have any misgivings about the veggies changing the taste,you can omit them  totally. I added them since I like some veggies with my chicken too

Scrumptious and  deliciously spiced  with the right blend of masalas, the rice and the sausages compliment each other very well to create a wonderful delicious dish. In fact, the taste of the sausages are doubly enhanced with the mix of rice and masalas.The tandoori masala gives that extra zing to the taste as it uplifts a regular dish to a gourmet style. the mint and coriander, coupled with rosewater actually gives a taste  that will signify with biryani . Yes , the aroma of the whole spices that connotes a pulao/biryani is much milder here, unless you steam the rice with whole spices like in a #biryani. But with extra dollops of ghee and fried onions as topping you can achieve a a taste very close to royal cooking.
and can be termed  terrific as a taste, to the palate of Indian cuisine.

The sausages have their own taste and mixed with the rice and the masalas that go upto making a #yummy plate of pulao/biryani , it definitely is a very easier way up to cook up a dish that could go as your main course entree for your next house event. Its so simple and quick with an outstanding taste that you will be surprised at your own cooking skills. A bowl of riata perhaps would seal off a perfect meal.

For me this is by far one of the easiest #homemade chicken and rice mix and can be prepared during occasions or even during a day when monotony seeps in. A definite try for sure. My sunday meals generally includes some great cooking from the kitchen, and today this definetely is the star of my lunch spread.. Bon appetite and a happy weekend