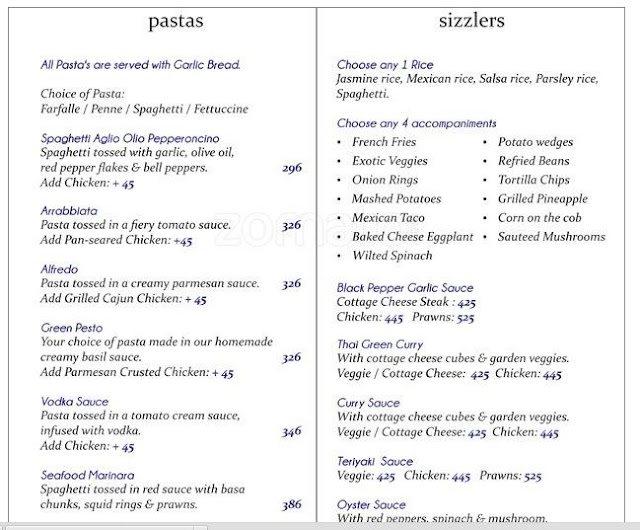 Sizzlers! One of my favorites in terms of a meal. Favorite ,coz it features a blend of healthy non oily veggies along with the grilled versions of meat( I love the grilled peices of chicken that comes with it). Doesn’t bloat your stomach leaving it with a much lighter feeling,the rich nutrients of of the veggies  truly satiating your body system in the perfect manner as per the rule books of the health conscious. Baring the french fries or potato wedges or the deeply fried onion rings, it can sum up to be a great meal if all that includes is stir fry veggies, a runny awesome sauce complimented with roasted chicken.Oh yes,accompanied by my favorite salsa rice!And udan noodles sometimes when oriental flavour rules my taste buds

But while claiming it as a  healthy option of eating out a scrumptious meal, the fries that come along with are a dampener. Crispy and tempting as they are,and most often irresistible, it does adds up to your calories and  whenever I have called for  sizzlers, the fries pose a perennial problem.And not many outlets have that option to replace them with veggies ,and even if they do ,there is no justice to the quantities replaced

Sizzlers generally come with your regular veggies, the main element of cottage cheese or chicken/meat/fish served along with a pound of rice or at times in certain places  do have the option of replacing  it into  noodles. And a choice of your own sauce, oyster, barbecue, garlic- pepper, etc.And yes ,at some places you do have options of choosing the side veggies too but not  everywhere.

Its got a great mix of food, at least for me, even in main course. Although the best by far are their their sizzlers.

Ironically , somehow I have always relished sizzlers at  non specific sizzler joints more then a specific sizzler joint.Maybe because of the limitations of  being confined to serve the original taste and type of sizzlers,  the sizzlers that come in a multi cuisine restaurant perhaps are more versatile with myriad options and combo of sorts too.They really dont need to adhere to the origins of a sizzler and its theory of elements required. So now,you also get Chinese sizzlers, american cowboy based sizzlers( I had this option somewhere and it was mind blowing I must say with cheese balls and potato croquets accompanied by a classic cheesy white sauce!!).Also, the sauce which is the hero of the dish has more options like you see in this case, even a Thai curry sauce is incorporated into the menu for an authentic Thai flavor. Isnt that just cool? So basically its no more  authentically Mexican, it has the extended beyond being a Mexican recipe , you take a combo of elements and turn it to your choice of taste and flavor .

So the other night ,I happened to taste one of the most gorgeous sizzlers primarily coz of the choice of elements that it had to offer. You could almost make your own sizzler with whatever elements you desire. And since I chose to opt for a  veg one, i realized it was even better coz there were too many choices to choose from. In totality you are allowed to rake 4 options from the list of almost about 12 options given .This is apart from the main ingredient which could be either chicken or cottage cheese or exotic veggies that accompanies with your rice/noodles..so overall you can choose 5 different elements including the main ingredient n the supporting rice or noodles.Elsewhere, out of the 5 elements the french fries and the veggies are most often constant and  you do not have a choice to change them until upon request perhaps. Here you are choosing your own ingredient and assembling them to your taste

First, I had  the choice of choosing or deleting the elements of french fries/ onion rings or potato wedges. If you didnt want them, you  also had options of turning them into veggies , which I did. Second is the list of stir fried veggies which had combinations of different exotic veggies which you could choose.

So in a way, if i chose bell pepper and broccoli instead of french fries / potato wedges, I can still  choose mushrooms, baby corn and broccoli yet again for the side veggies. Which means I had an entire plate of exotic veggies, baby corn, mushrooms, broccoli, zucchini. This of course doesn’t include the main element which could be cottage cheese/meat/fish/chicken/exotic veggies. I think I chose cottage cheese in this case.Of course then you have another 4 choices of the rice. As you can see, parsley rice, jasmine rice, salsa rice and Mexican rice are options to choose from. Now that”s what you call a delight. Also spaghetti for the ones who are not too fond of rice

So you have a choice to choose the side munchies, another choice to chose the side veggies, few more choices for the main element of meat or cottage cheese and then 4 other choices to choose from the rice.Not to forget the widest choice of sauces to complement your own amalgamation of the elements that you just choose. Garlic pepper, teriyaki, oyster(which is my favorite ),barbecue and not to mention the Thai curry sauce seemed just superb. Dribbling of this awesome sauce over the sizzling veggies is just too perfect.Absolutely outstanding. I mean, i have never had such a wide set of choice anywhere else not even the best of the 5 star hotels .

On the flip side, I do think they could have included noodles (although they do have spaghetti as a choice)as an option for people who chose to avoid rice perhaps or maybe fancy noodles more then just rice. Also, since  a wide variety of noodles exists today, udan(Japanese), flat noodles, wheat flour noodles,it could have been a wider choice of culinary delight . That , in my view could have been a perfect seal to this fantastic meal

Quite enchanting, hugely appreciable is what i will sum up this to be. I really didn’t need anything else to go by it. By giving the customer choices ,it placed me at  a comfort zone. I wasn’t forced to munch on the high on calories french fries and I had the choice to even remove zucchini and the tasteless cabbage  from my list of veggies.Not to mention the style of sauce which I could choose thus lending my very own flavor to the elements . Truly awesome.

For sizzler lovers, I think this is something that you should request for  if you love assembling your own sizzlers. Trust me, you will not have a more satisfying meal then this . And for restaurants that offer sizzlers as a part of their menu,I think this is a well deserved thought.More customer friendly ,highly appealing,and an avenue perhaps to increase the share of revenue earned through a plate of sizzlers.