Posted at 11:06h in Fusion Recipes by Indrani Sarma 0 Comments

Now ,these are soon becoming my emergency desserts or midnight snack mostly.
They are the most easiest to prepare with an outstanding taste, decadent and succulent to the core.
Crisp on the outer side with a  gooey filling of nutella inside,  u need to lick your fingers as the nutella dips down on the very first bite..Its gooey  and outrightly moist, perfect for a sweet tooth.The crispiness of the outer crust with the gooey center teams up well for a perfect balance of taste.

Honestly i had this bottle of nutella in my kitchen which was specifically bought for making some cake pops.but just. not been able to make them coz of shortage of those sticks

Nevertheles the point is, i generally feel very hungry  if i m up late working or watching tv. And many a times there is nothing in the kitchen to satiate my midnight cravings.Mostly a chocolate or something sweet is what most warms me up or is something that I indulge in.On a  particular day, i thought of cooking up something with my nutella,but didnt knw what.It had to be super quick as well and worth savouring.

And suddenly i had this crazy idea of a fusion blend of a gujiya kind of a thing filled with nutella. In fact just a few days back, my cousin from las vegas happened to mention about some chocolate samosas that he tasted not so long ago, so that ruled my mind for a few days and i was pondering how to infuse that blend. So somewhere in my mind; since i had my nutella, i though of blending it  into a pasty puff kind of a thing…Super quick and easy.And i must say that it was one of the best chocolate homemade recipes that one can come up with during emergency.a and especially for a kids party.

For us Indians gujiya  its a very common sweet mostly common amongst north indians and synonymous with the Holi festival. But in our household, I remember mom making them with our own version of coconut and sugar during regular days.Its actually quite a common sweet in Assamese culture and although it does not have a distinct name yet many would like to call it as the “sepa” pitha. Anyways,the upper crust is used for a variety of indian sweets. with a sweet filling, it could be cocoanut/mawa generely.Of course the shape is different,.But that’s where the line f differences end.In the end the filling changes and the shape, while making of the crust and the style of cooking remains the same.

For me , these are made like gujiyas however i added a little milk and sugar to the base and made two varieties. One with the normal half moon shaped and the other shaped somewhat like wontons..Of course you can shape them as you like .

These are our indian version of the Fried raviolis and the wonton perhaps, the only difference being in the addition of egg in the chinese/italian counterparts and of course the shape and the filling.

So there, whatever you call them , nutella gujiyas, nutella samosas, nutella puffs, for me they were the perfect dessert midnight snack for me.

Out rightly delightful and gooey with the nutella dipping out on your first bite, a little chocolate syrup on the top like dressing that which gets mixed with the nutella works out like magic. Its yummy, sinful and very irresistible.Chocolaty ,crispy and delicious. Its a crime if you haven’t tried this ever. A quick and easy dessert, if you have kids at home it is sure to be a hit . Not just them, for everyone who loves sweets, this is a must have , twisted taste that which is captivating coz of the deadly combo of the crispy crust and nutella.  Your guests wont stop at one and will keep wanting  for more ..As for me , as i end my post , i need to get back to my cup of tea and these wonderful sweet morsels..Sinful bliss is thy name.. 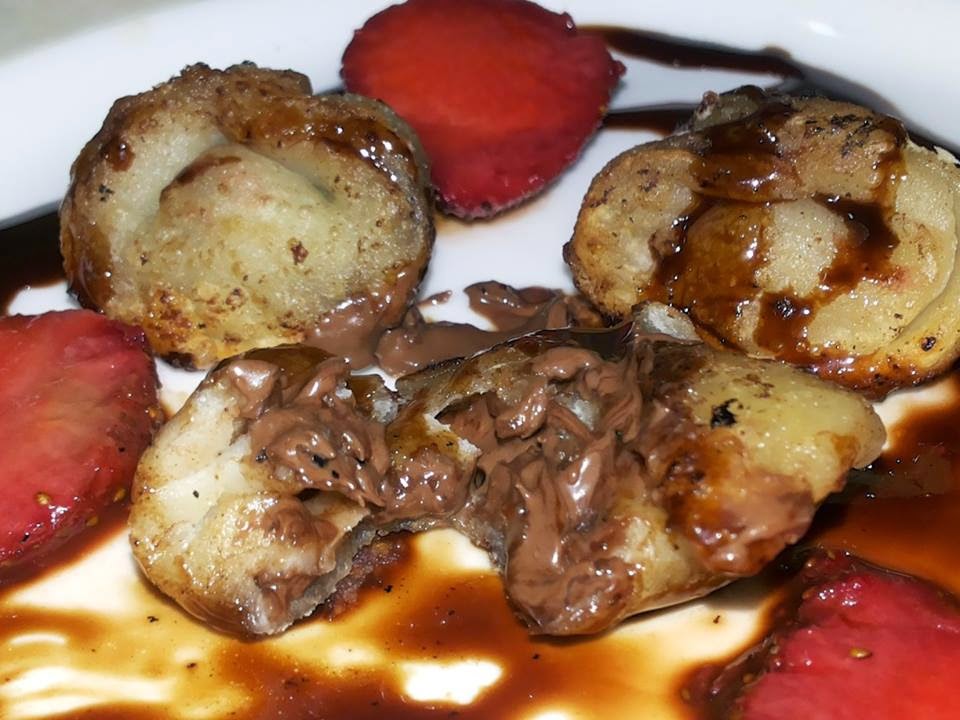